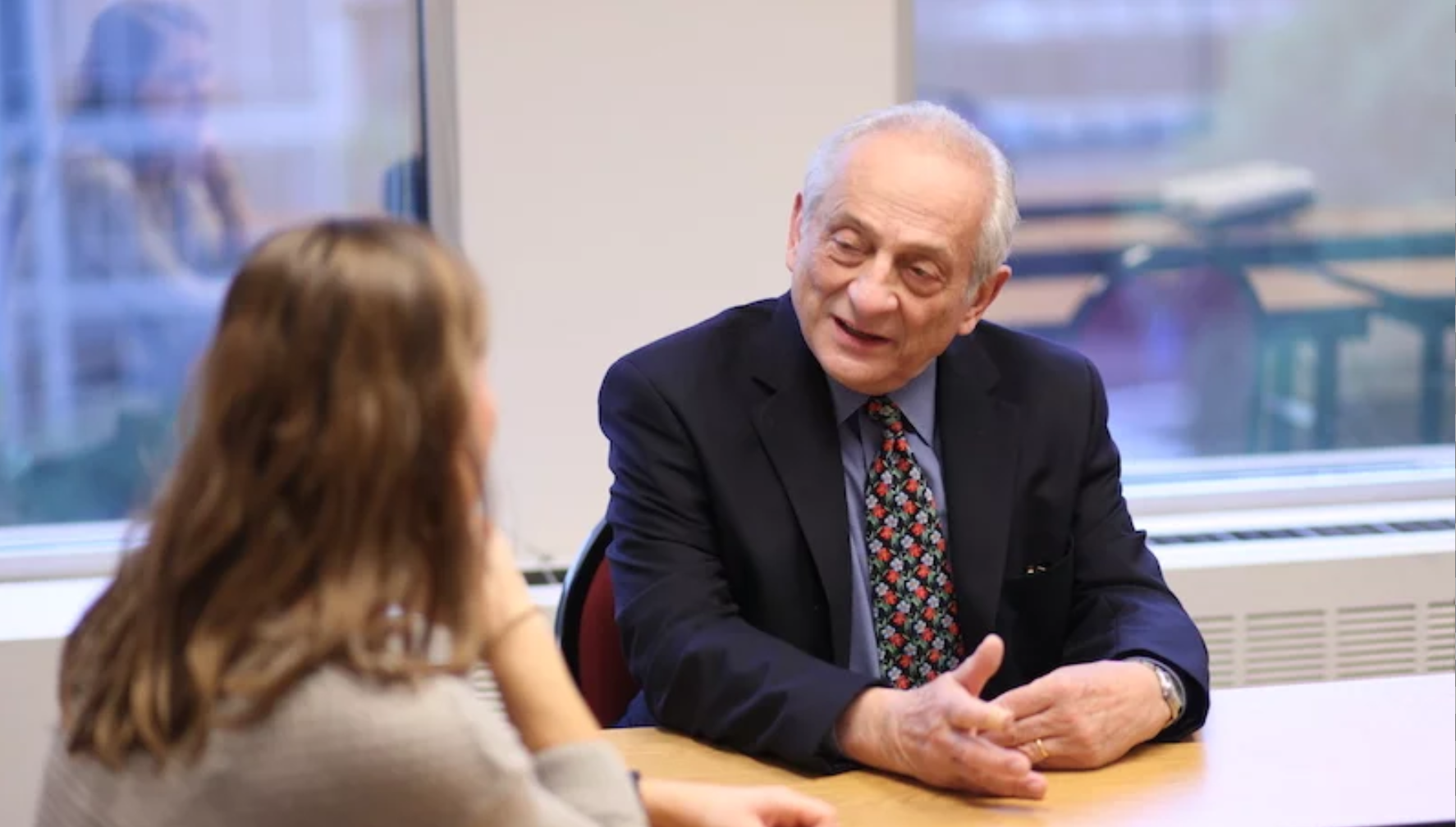 Paul C. Vitz, Ph.D. is Senior Scholar and Professor at the Institute for the Psychological Sciences, Divine Mercy University. He is a co-founder of DMU and has been an active part of it since its founding in 1999. He received his Ph.D. from Stanford University where he majored in personality theory and experimental cognitive psychology. For many years he was Professor of Psychology at New York University, where he is now Professor Emeritus. He also was a professor at the John Paul II Institute for Marriage and Family, in Washington, D.C. from 1991 to 2001.

His primary areas of interest and research are: personality theory and its integration with Catholic theology and philosophy; the nature and historical origin of human consciousness; the importance of fathers for the family; how men and women are equal in dignity but different and complementary; the psychology of atheism; the psychology of the virtues; identity; hatred and forgiveness. He has recently returned to some of his early work in cognitive psychology, such as models of sequential pattern learning, and the study of perceptual images and their drawings.

He has published many articles, essays, chapters, videos, Op-Eds, etc. His books, with the first three translated into other languages, include: Faith of the Fatherless: The Psychology of Atheism 2nd Ed; Sigmund Freud’s Christian Unconscious; Psychology as Religion: The Cult of Self-Worship, 2nd Ed; Censorship: Evidence of Bias in our Children’s Textbooks; The Self: Beyond the Postmodern Crisis; Modern Art and Modern Science: The Parallel Analysis of Vision.

William J. Nordling, Ph.D., is Professor and clinical supervisor at the Institute for the Psychological Sciences (School of Psychology) at Divine Mercy University. He is one of the co-founding faculty members of the IPS (DMU) and for 18 years served as Chair of the Department and then as Academic Dean. He received his Ph.D. in clinical psychology from the University of Maryland, College Park, and is licensed as a clinical psychologist.  He also holds the credential of Registered Play Therapist – Supervisor through the Association for Play Therapy.

His areas of expertise include child, marriage, and family therapy and he has conducted over 200 training workshops and presentations in these areas.  He is widely recognized as an expert in the area of play therapy, and is co-author of the award-winning text book Child Centered Play Therapy: A Practical Guide to Developing Therapeutic Relationships with Children.

Prior to coming to the IPS in 1999, Dr. Nordling served as Clinic Director and Director of Certification Programs at the National Institute of Relationship Enhancement (NIRE).  Dr. Nordling currently holds training faculty appointments in a number of training institutes around the world including NIRE, Play Therapy Australia, and ChildPlayWorks (New Zealand). Dr. Nordling was a founding Board member and served as President of the Catholic Psychotherapy Association.  He was a founding Board member of the Maryland Association for Play Therapy. He also served on the Board and as President of the national-level Association for Play Therapy.

Craig Steven Titus, S.T.D., Ph.D., is Professor of integration at the Institute for the Psychological Sciences and Director of the Department of Integrative Studies at Divine Mercy University, where he has worked since 2002. He received his Doctorate of Sacred Theology from the University of Fribourg, Switzerland.

His areas of expertise include: virtue theory and the psychology of virtue; the integration of psychological sciences, philosophy, and theology; the nature of the human person; practical reason and moral character; and marriage and family life.

He previously worked at the University of Fribourg as Researcher, Instructor, Vice-Director of the St. Thomas Aquinas Institute for Theology and Culture, and Vice-Director of the Servais Pinckaers Archives. Dr. Titus has published numerous book chapters and journal articles, for example, in: Journal of Positive Psychology; Journal of Psychology and Christianity; Journal of Moral Theology; The Thomist; Edification: The Journal of the Society of Christian Psychology; and Revue d’Ethique et de Théologie Morale. His book is entitled, Resilience and the Virtue of Fortitude: Aquinas in Dialogue with the Psychosocial Sciences. He is also co-editor of The Pinckaers Reader: Renewing Thomistic Moral Theology and editor of nine other books.

Christopher Gross, Ph.D., is Assistant Professor of integrative studies at the Institute for the Psychological Sciences, Divine Mercy University, where he has work since 2015.  He received his Ph.D. from the Catholic University of America.  His research has focused on Thomistic virtue ethics, philosophical anthropology, and bioethics.  Dr. Gross has taught theology at several institutions, including Catholic University of America and the Dominican House of Studies.  His research has appeared in academic journals, such as The National Catholic Bioethics Quarterly.

Lisa Klewicki, Ph.D., is a licensed clinical psychologist, associate professor of psychology, and associate Psy.D. program director at the Institute for the Psychological Sciences at Divine Mercy University, where she has worked for nine years.  She received her Ph.D. in clinical psychology from the Graduate School of Psychology at Fuller Theological Seminary.  She also received her M.A. in Theology from Fuller Theological Seminary.  Dr. Klewicki’s areas of expertise include the psychotherapeutic process, psychological assessment of children, adolescents and adults, and the use of assessment as a therapeutic technique. In addition to teaching, she has been in part-time clinical practice for over 18 years, focusing on providing psychotherapy and psychological assessments to a variety of clients.

Margaret Laracy, Psy.D., is a licensed clinical psychologist in private practice in Bethesda, Maryland. She received her Psy.D. from the Institute for the Psychological Sciences at Divine Mercy University. Dr. Laracy has worked as a clinician for a number of years with expertise in individual, marital, and group psychotherapy. She is also currently a candidate with the Psychoanalytic Training Institute of the Contemporary Freudian Society. In addition to her clinical work, she is adjunct assistant professor of psychology at the Pontifical John Paul II Institute for Studies on Marriage and Family and she was assistant professor at the Institute for the Psychological Science for four years.

Su Li Lee, Psy.D., is Assistant Professor of Psychology and clinical supervisor at the Institute for the Psychological Sciences at Divine Mercy University, where she has worked since 2012. She also works as a clinician for the Alpha Omega Clinic. Dr. Lee received her Psy.D. from the Institute for the Psychological Sciences and a M.Sc. in Experimental Psychology from the University of Sussex in the UK. She is currently licensed as a clinical psychologist in the Commonwealth of VA. Her areas of clinical interest lie primarily in individual psychotherapy and behavioral health consultation, with a sub-specialization in the area of trauma work.

Matthew R. McWhorter, Ph.D., is Assistant Professor of integrative studies at Divine Mercy University, where he has worked since 2016. He received his Ph.D. in Theology from Ave Maria University. His areas of expertise include theological/philosophical anthropology, fundamental moral theology, and philosophical ethics. Dr. McWhorter has taught philosophy and theology at several institutes of higher learning, including Holy Spirit College, Ave Maria University, and the Catholic Distance University. He has also taught courses for the diaconate formation program in the Archdiocese of Atlanta. His research has appeared in academic journals such as The Irish Theological Quarterly, The Heythrop Journal, Nova et Vetera, Studies in Christian Ethics, and others.

Frank J. Moncher, Ph.D., consults as a clinical psychologist for the Diocese of Arlington, serving at the Victim Assistance Coordinator, Assessor in the Tribunal, and as the Director of Training in Catholic Charities. He is licensed as a clinical psychologist in Virginia and Washington, D.C.  Frank received his Ph.D. in Clinical-Community Psychology from the University of South Carolina in 1992, following which he spent several years on faculty of the Medical College of Georgia. In 2000 he began to teach at the Institute for the Psychological Sciences, before beginning his work with the Diocese of Arlington in 2010.   Concurrent with this, he has consulted with numerous religious orders and dioceses to provide psychological evaluations of aspirants and candidates.  His research interests include the integration of Catholic thought into psychotherapy, child and family development issues, and integrated models of assessment of candidates for the priesthood and religious life.

Harvey Payne, Psy.D., is Dean of the School of Counseling, Associate Professor, and co-director of the Clinical Mental Health Counseling program at Divine Mercy University, where he has worked since 2014. He received his Psy.D. from the Massachusetts School of Professional Psychology and is a licensed clinical psychologist. His areas of expertise include the use of narrative to bridge Christian faith and psychology, the overlap of attachment theory and the Christian model of covenant relationships,  professional ethics, and  neurodevelopmental disorders. Dr. Payne has worked in the mental health field for over 30 years, primarily in organizations serving children and adolescents with a variety of life issues and disabilities. In addition to his work as a mental health provider, he has also functioned as an administrator, educator, and overseas consultant. Prior to joining Divine Mercy University, he served as Dean of the College of Counseling at Columbia International University.

G. Alexander Ross, Ph.D., was Professor of Social Psychology at the Institute for the Psychological Sciences, Divine Mercy University, where he was also Dean of Students. He has served for many years as a member of the Board of Directors of DMU (IPS). He received his Ph.D. in sociology from the Ohio State University in 1976.  His areas of scholarly interest have included the social response to natural disasters and other emergencies, historical demography, the integration of the social sciences with a Catholic anthropology, social change in the family and religion, and the social psychology of happiness. Dr. Ross has taught at institutions of higher learning in Michigan, Ohio, and Florida. His research has been published in several scholarly journals, including Human Relations, Journal of Family History, Michigan Historical Review, Edification: Journal of the Society of Christian Psychology, Catholic Social Science Review, and Interdisciplinary Journal of Research on Religion.

Philip Scrofani, Ph.D., ABPP, is professor of psychology and clinical supervisor at the Institute for the Psychological Sciences at Divine Mercy University, where he has worked since 2004. He received his Ph.D. from The Catholic University of America and is licensed as a clinical psychologist. He has been Board Certified by the American Board of Professional Psychology since 1990. His areas of expertise include clinical psychology, cognitive-behavioral therapy, group therapy, and research review. Dr. Scrofani worked at the Commission on Mental Health Services as the Director of Psychology for 12 years, where he had oversight responsibility for approximately 100 clinical psychologists and administrative responsibility for an APA-accredited psychology internship. He also served as the Director of Family Psychotherapy Training for five years. He continues to have a faculty appointment with the Psychiatry Residency Training Program for the Department of Mental Health.